MIDI Routing and Processing for iPhone and iPad 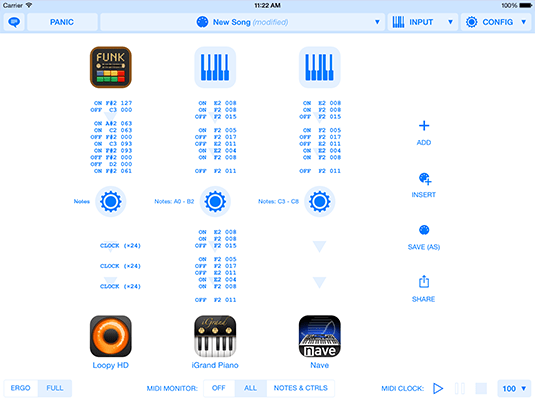 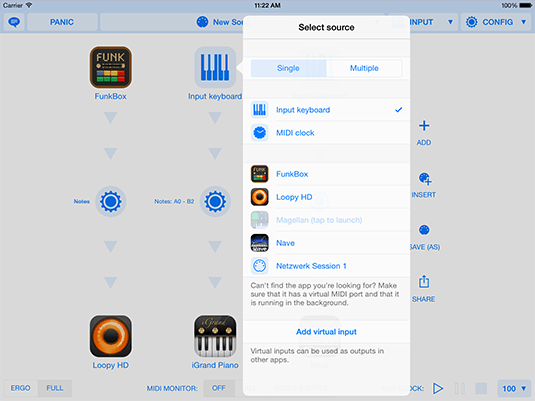 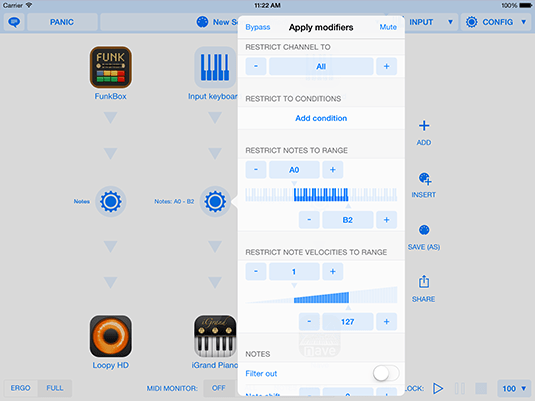 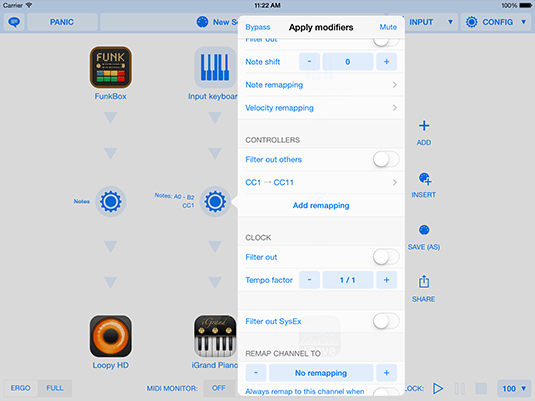 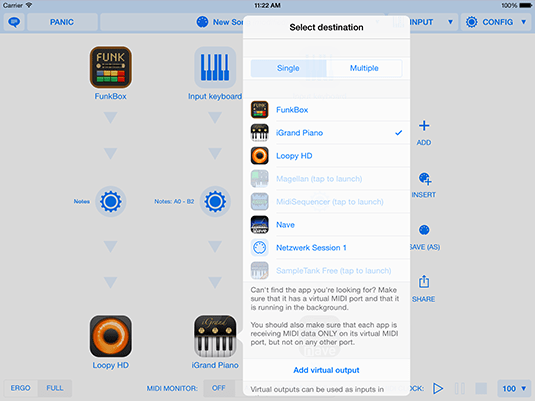 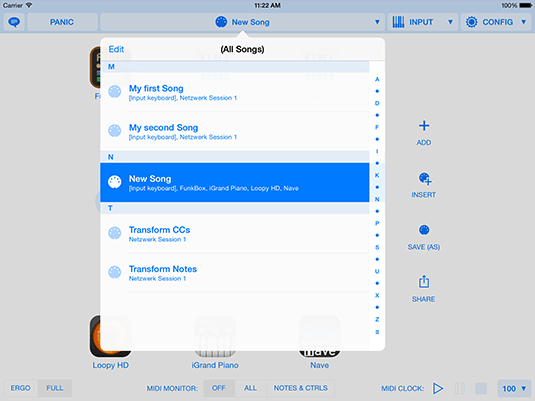 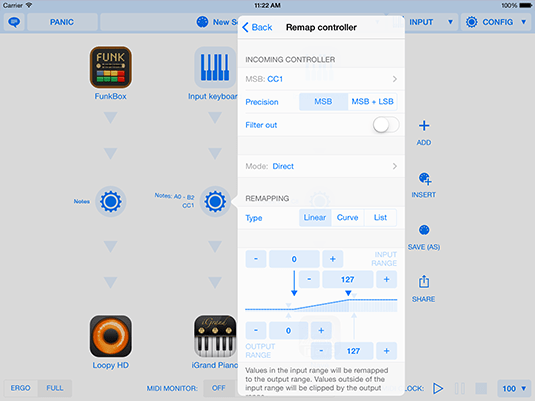 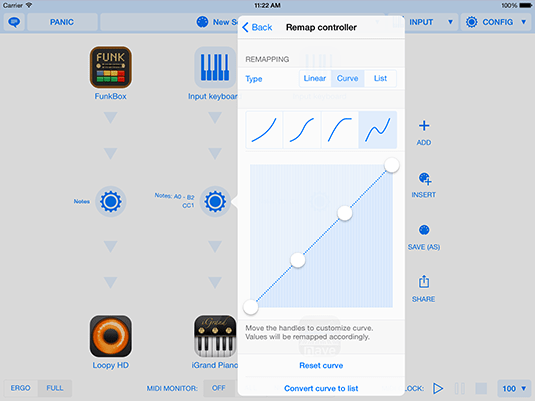 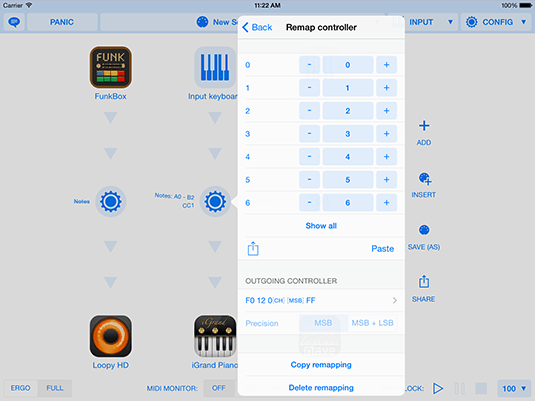 Send MIDI data like notes, control changes or clocksync from app to app like what you already do with audio

Combine apps on your keyboard

Sync your sounds
via MIDI clock

Use the precise internal MIDI clock to keep all your sounds, effects and sequencers in sync

Save and recall configurations

Midiflow for Audiobus 3 is here!

Learn more about those brand-new apps

"I downloaded Midiflow on a whim, as it looked like exactly what I wanted - one screen to view, set up and adjust the midi....flow...... (oddly enough) of my music making apps and hardware. I use multiple midi keyboard controllers hooked up to my iPad via a powered USB hub, controlling different apps simultaneously, and this app works flawlessly for deciding which app I'd like to control with which keyboard. The interface is clean and obvious, and anybody that has used audiobus will feel right at home with this app. There are even deeper controls for assigning keyboard layers or remapping channels. It all 'just works' and is exactly what I was looking for. I also contacted the developer with a question late at night, and received a very helpful response within 12 hours. Excellent app. Excellent developer. Thanks a lot!" — Xanark, United Kingdom

Revolution in MIDI on iPad!

"This is exactly the app that I was wainting for so long! It completely revolutionizes what you can do with MIDI on an iPad. You can reroute basically anything. If you are a musician and you want to get maximum from the music apps on an iPad and you are familiar with how MIDI works, then this app is a must." — TomasProkopic, Czech Republic

"I recommend this app. I downloaded this primarily to allow control of parameters via MIDI control changes from my synth which itself has lots of physical controllers - the in-app purchase adds that so I can change the incoming control to match the one I want change in the synth app I'm using. I have tested Midiflow 2.1.0 on iPad 2 running iOS 7.1.2 and worked for me with these: Arturia iSEM v1.0.4 Apesoft iVCS3 v1.3.1 Omenie M3000HD v3.0.2 Moog Animoog v2.2.3 Waldorf Nave v1.6.2 Wolfgang Palm WaveMapper v2.0.3 Wolfgang Palm WaveGenerator v2.0.5 Did NOT work with Arturia iMini v1.5 and Arturia iProphet v1.1 which probably means Arturia have not configured MIDI as well as on their iSEM. Had mixed results with the Korg iPolysix v1.1.4 because Korg stupidly gave fixed MIDI channels." — Niceornaff, United Kingdom

Midiflow allows you to send MIDI from app to app in a similar way to what you already do with audio. That way, you can sync apps with each other or send MIDI parts from a sequencer app to different synth apps. You can also route the MIDI from your keyboard to apps and assign different key zones to them. Different settings can be stored as a preset, recalled later and inserted into another preset. Furthermore, all MIDI transfer can be monitored in order to find problems or just to learn what MIDI is doing (normally) behind the scenes.

How does it work?

Midiflow allows you to create multiple routings. Each routing receives MIDI data on its source and sends it to its destination. The selectable sources and destinations include your CoreMIDI compatible MIDI interface and other apps if they provide a virtual MIDI port. You can also create custom ports that can be used by other apps to receive data from Midiflow or send data to it. A routing also has a modifier which allows you to filter data or modify it. That way, you can transpose notes, limit them to a key range, change the MIDI channel of the incoming data, etc. (see the feature list below).

Take a look at the full documentation for more information.

Take a look at the full documentation for more information.

Does Midiflow work with my synth apps?

Midiflow works with every app that has a correct MIDI implementation. In the best case, it has an own virtual MIDI port and can be configured so that it receives MIDI only on that port. Unfortunately, some apps don't have that, but can at least be restricted to one MIDI channel. In that case, you can send to that channel on the global MIDI port "Network Session 1". If you can't select a channel either, then the app won't work with Midiflow. The tutorial video below explains this in more detail.

In this video, you'll learn about the basic concepts of Midiflow. As an example, you'll see how to use it for playing two synths on different key zones on your keyboard.